I recently received an email from a friend at a large industrial general contracting firm asking for assistance reviewing and evaluating an electrical subcontractor’s change order for Acceleration costs. In this situation, the Owner had added a significant amount of scope but was unwilling to extend the duration of the project past its scheduled delivery date.

As a former electrical contractor, and a PM for large national electrical contractors, I have been in these situations before - massive amounts of scope changes and an Owner who is unwilling or unable to move the scheduled completion date due to external forces (bank loans, start-up commitments, production needs, etc.). I have successfully navigated these situations, been able to calculate the projected costs, and been funded for the amounts needed to compensate my company (or my employer) for these cost impacts, which is why my friend reached out to me for assistance.

The electrical subcontractor had previously priced and submitted Change Order Proposals (PCOs) for the extra scope items at normal labor levels and rates, based on an assumption of extended time to deliver the changes. These change order proposals had been approved, but when the subcontractor subsequently learned that there would be no schedule extension, The Owner and GC felt it only fair to offer the subcontractor the opportunity to submit a separate change order proposal for the acceleration costs (Overtime, stacked trades, productivity losses, additional supervision, etc.) associated with the changes.

Below is an image of the Acceleration cost breakdown they submitted for almost $600k:

The subcontractor also included the lost productivity matrix from MCAA, which I have also referenced in my previous article about Change Orders.

After careful review of the information provided, I crafted the following response:

In general, he’s not wrong, but his math appears to be skewed. I have also used similar charts and formulas to justify production losses from forced OT to recoup costs.

He’s using the standard OT1 rate chart from MCAA, which includes NECA projections for Union contractors (see chart below, blue line). This is a model, not an actual, and is based on 5 x 10 schedule. His spreadsheet is showing a 45-hour week (5 x 9).

You can find the original MCAA table here (use the TOC to jump to section OT1):

It looks like he’s also inflated the % of hours lost for each week. He included the table from MCAA OT1 which clearly shows the following productivity declining progression for 50-hour weeks for mechanical contractors (not electricians), which are similar amounts, but not exactly the same.

From the table, we can calculate the percentage of losses:

I would reduce these by 2-4% minimum for working a 45-hour week vs. a 50-hour week, as 45's aren't as draining on the staff. You can see from the chart that Electricians (NECA line) are generally more productive overall than the linear decrease line.

You could also argue that your subcontractor is a merit shop contractor, not a union contractor, and as such they are often estimating and performing at better-than-union production rates. The Union factors in apprentices at a forced ratio and are therefore less-productive overall than a merit shop contractor who can adjust their crew mix as they see fit. However, this is a weaker argument, and he may be able to say he’s charging more for all Journeymen electricians (see his flat rate of $55/hour). I don’t see anything related to crew mix, so he’s either using a blended rate, or he’s telling you everyone is making $55/hour on OT as a journeyman electrician and there are no apprentices.

He’s also assuming that every worker will work 9 hours/day every week for 17 weeks. There’s nothing in there for holidays, people missing a day, people coming in late or leaving early, only working 8’s, etc. I would assume a general 10-20% reduction in workforce hours required based on these factors. So, either he’s factored that in somehow that we can’t see, or he’s just extended the duration of OT that will be required to compensate for this. Once a worker gets some extra time off, they are more productive afterwards, so the clock kind of resets on them. This is hard to factor, so we’ll just lump it into the reduced percentages for production losses.

Lastly, he’s added 10% for additional supervision (322 hours = 7.3 weeks). Is he actually adding another supervisor for 7 weeks, or just fluffing up his numbers? The supervisor OT should already be captured in his crew calculations.

I’ve made some adjustments to his spreadsheet, see attached. I lowered the hourly rate to account for apprentices at a lower base wage, decreased production loss % by 2-4% from the actual # shown in the table on the left, and removed the supervision. This changed the pricing from $589,185 to $277,397, saving you $311,788. You could probably argue to reduce the production loss percentages even further, but this is a good starting point for discussions with your subcontractor.

My Revised Version of the Acceleration Change Order Pricing: 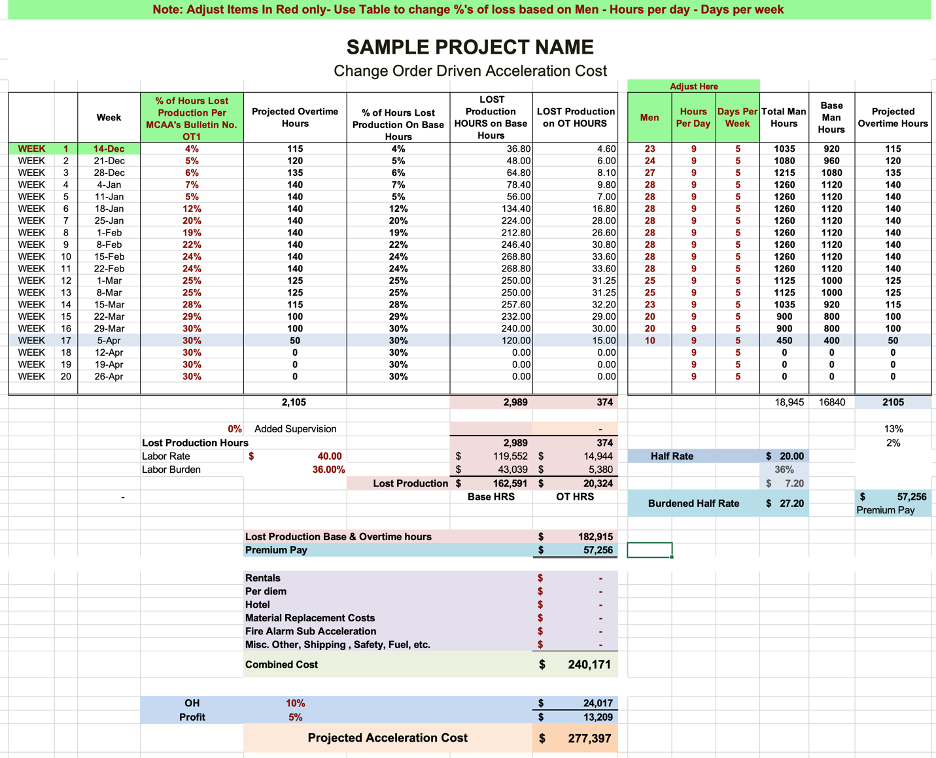 Based on my response, my friend went back to his sub and asked him many of the questions I outlined. They had an honest discussion, and the subcontractor revised his pricing to more closely align with ‘real’ anticipated costs for the Acceleration impacts. Working together, they got the math to a point where they both felt comfortable presenting it to the Owner for consideration.

Can you imagine if the GC had just accepted the initial pricing and presented it to the Owner? I’m sure most Owners would have asked many of the same questions I did and poked a lot of holes in the math, which just didn’t ‘add up’. Both the GC and the Sub would have looked bad in the Owner’s eyes, and there may even have been a loss of trust between all parties.

Thankfully, my friend had the wherewithal to reach out to someone with more experience in this area and get an outside expert’s perspective.

So, what’s the moral of this story? I think there are a few lessons to be learned:


Do you have a similar story to share, or need some help with Acceleration costs and similar challenges on your projects? Get in touch with us today and start a conversation.

If you're ready to start working on your business, let's talk!

Ascent Consulting’s mission is to Build Better Construction Companies.
We are committed to delivering impressive results in the areas of
profitability, performance and growth.